Guildlings: A Coming of Age RPG

So let's start with the structure of the game. You might call the game a traditional team adventure rpg. You put together a team of long lost friends. In order to complete your quests, you will select your team of 3 friends each with different special abilities that help unlock certain areas of the map and overcome certain obstacles. 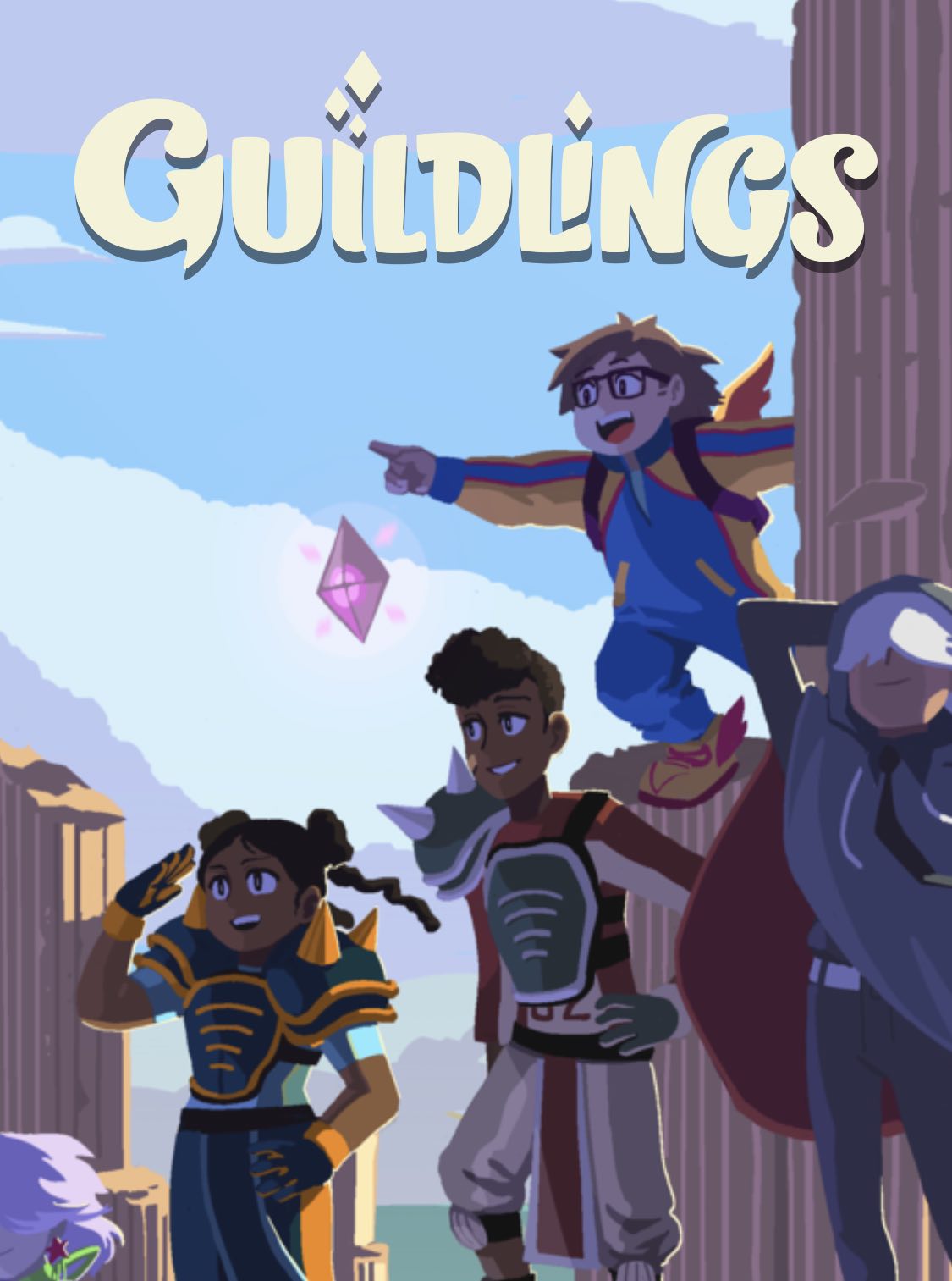 Guildlings plays out like a summer break coming of age adventure. Through playing the game you'll reconnect with old friends, overcome scary obstacles, and learn to emotionally mature with yourself and your friends. While there are many games in this genre, Pokemon is probably the most well known. The contours of Pokemon, an adventure, overcoming obstacles, managing a team map onto Guildlings but there are a few key differences where Guildlings feels fresh.

The world of Guildlings, like Pokemon, feels alive with the intersection of magic and technology. It's hard to tell where one begins and the other ends. At the same time, it's filled with the detritus of consumer culture that makes it feel lived in. You will fill up on chips and soda, find a friend at a dive bar, and encounter crabs in trash bags. While the universe it lives in is magical, the stuff that makes it up feels commonplace, like living right on the edge between childhood and adulthood.

It’s hard not to like this game. The art style is bright and cartoony, but with enough detail to articulate the differences between characters with their styles.

The story feels like a game's take on YA novels. It also inverts a lot of tropes about RPGs. The focus of the game is on personal growth and emotional management, rather than on defeating enemies. Like other team-based adventure RPGs players spend a lot of time battling enemies. Unlike in a traditional RPG, the goal of a "battle" isn't to wear out your enemy. Rather, the goal is to withstand the attacks of the enemy with your health and moods intact. This inverts the focus from external power to internal management and understanding.

It fits with the overall theme of the game. You are on a journey of self discovery, and the goal is to unlock new powers and abilities among the characters you manage, rather than trying to defeat the strongest enemy. For the most part this doesn't change your gameplay. You will lead your adventurers around, trying to unlock certain areas of the map either through your special abilities, by collecting special items, or by withstanding a new enemy. The tactical side of the game, "battling" enemies also doesn't change much, except you are only focused on your health, rather than your health and your opponent.

The focus of the mechanics fits well with the theme of the story and pushes the attention of the player onto the characters instead of optimizing arrays of abilities for the proper amount of efficiency. It felt cozy and human rather than arcane and supernatural. It also spoke to my experience as an adult living in the world. Most of the time I spend "leveling up" by introspecting my emotions and reactions to the world, trying to find ways to change my habits and shape my responses to have a positive affect. The game still manages to be escapist fantasy, but it doesn't carry the baggage of power and domination. I enjoyed this fact quite a bit.

As I continued to play the way that I was asked to control energies and character moods felt unfulfilled. When you're not battling you'll often spend time talking to friends or strangers who can change your moods depending on what and how things are discussed. This makes sense. In Guildlings special abilities are tied to players moods, so a certain character might only be able to use their "Dash" ability if they feel "cool". 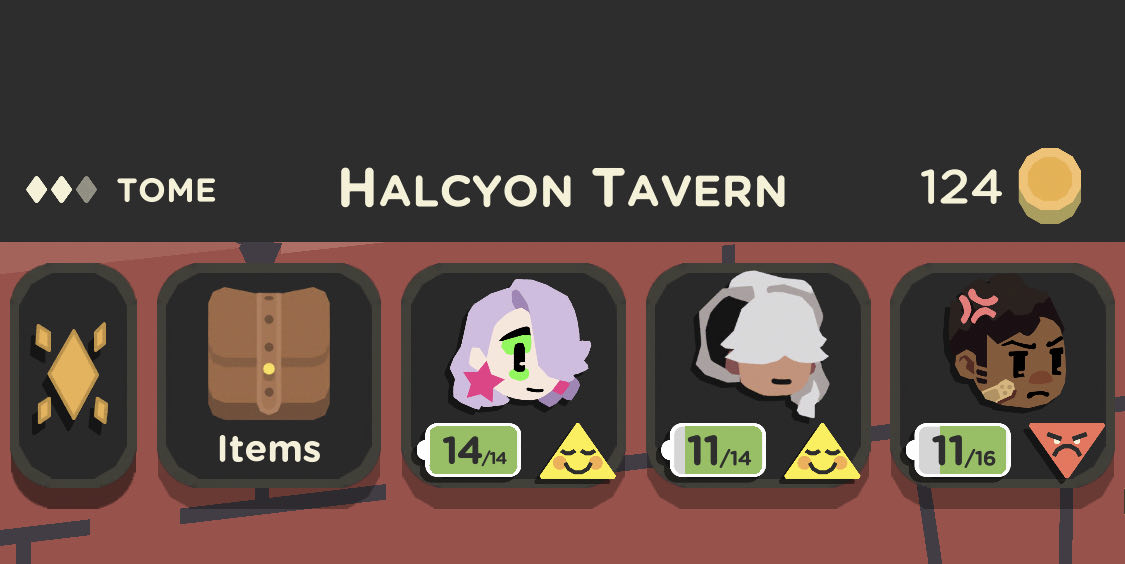 As the group leader, I was tasked with "managing" the moods of my characters, but there was almost always a "right" mood for my characters to be in, the one that would allow them to use their special ability. While this makes sense from a design perspective, as a player it felt like I was instrumentalizing the emotions of my friends. Furthermore, if we were at a spot on the map where I needed to use a certain ability, I found myself picking fights so I could change my mood to access that area. The idea of taking advantage of the outside world in order to accomplish my goals felt wrong. A similar situation happens in the game where a character admonishes your party for taking advantage of the world for your own ends. It felt like a situation where the story tried to say one thing, and the structure of the game said another.

It feels unfair to knock Guildlings for this. I appreciate the shift in tone, and the occasional moment of discordance is a fair trade for a genuine attempt to tell a new story in a new way. Finding a way to square that circle, using emotions as mechanics without instrumentalizing them, is a hard problem. It can only get better as more teams try to tackle that challenge, and I am appreciative Gulidlings went for it.

I want to end on a positive note, and on a note that almost makes playing the game worth it on its own. Guildlings has incredible UX. The game feels like a phone game because it uses the patterns of popular apps as core character interactions. In the game, you communicate with your team and the world via a Tome, a type of smartphone in the world with ancient and mystical powers. There are two types of interactions that you use most often, a tap, and a hold. You might use this to direct your team around the world: tap to go to a location, hold to move in a direction. You might use this to interact with objects in the world: tap to expand options, long press to take action that will be apparent from the object you are acting on. 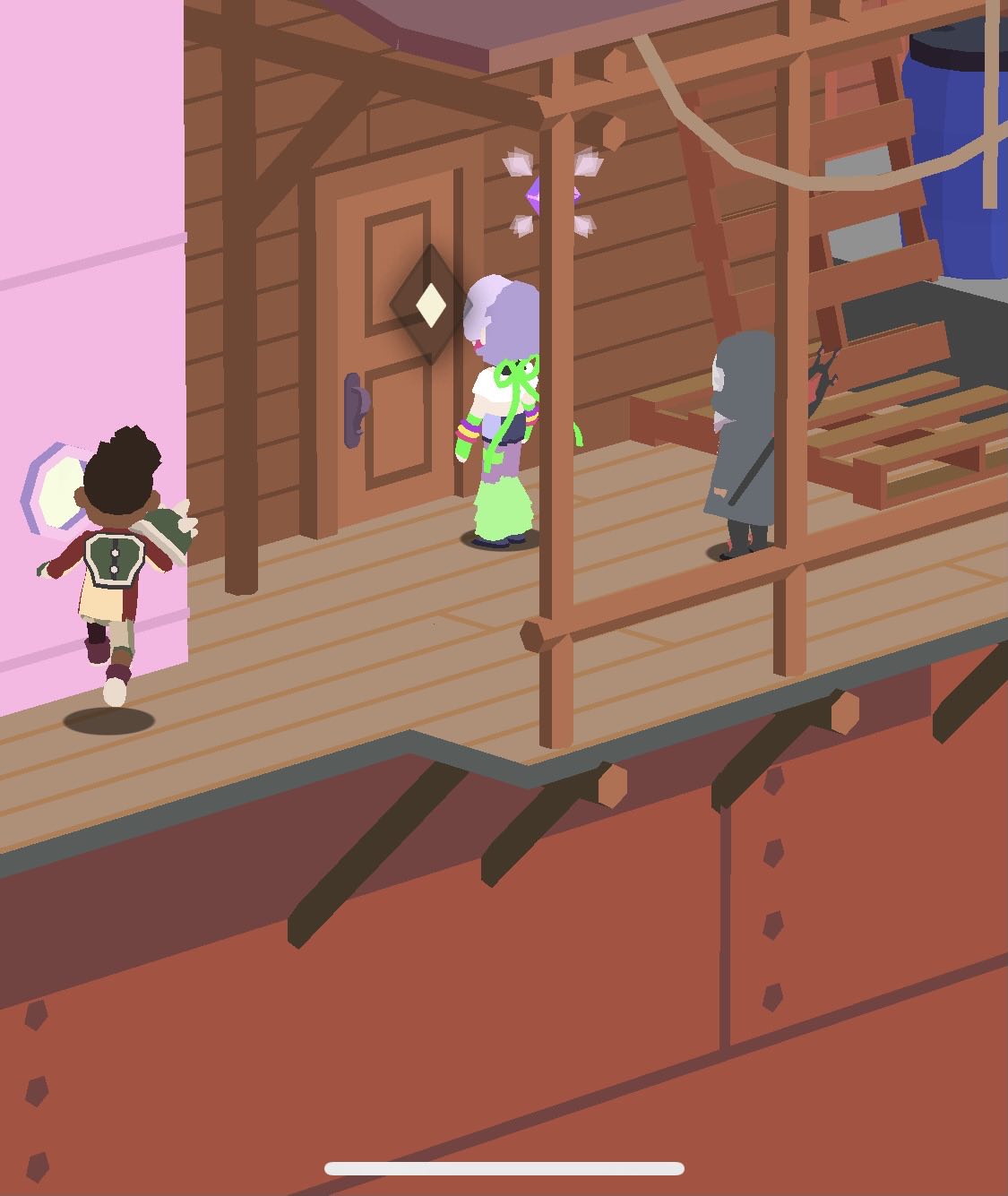 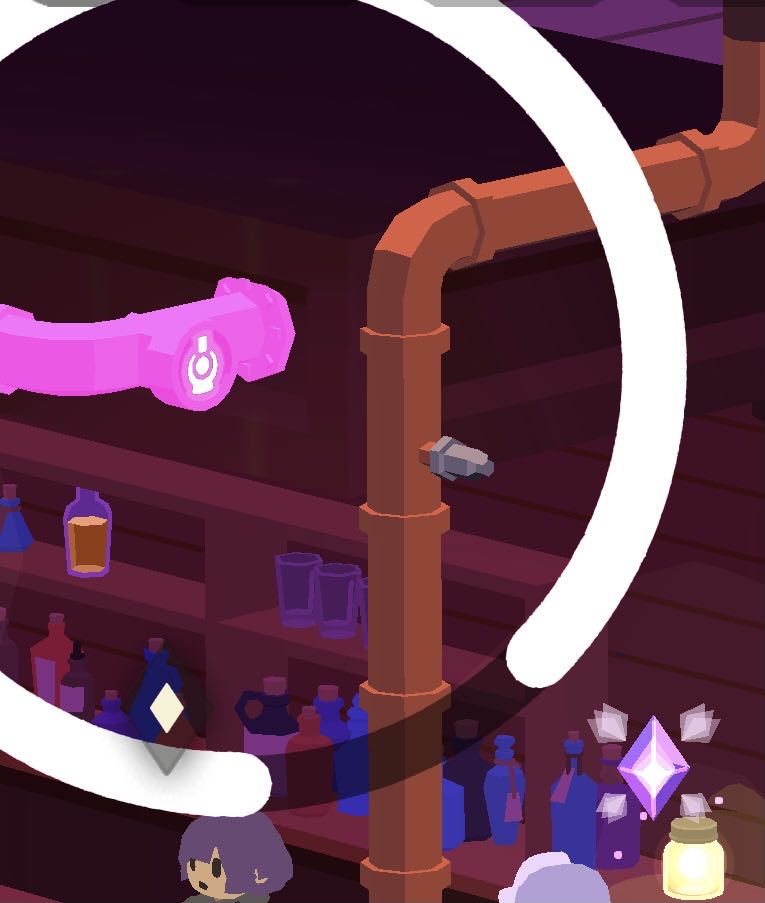 When you long tap on an item, a circle starts appearing around it, as a simple delay to confirm you want to take the action you intend. This plus haptics feels fun and creates a lovely affordance to prevent players from doing something they might not want.

Guildlings also uses this to its advantage in the intro to the game. It takes the idea of "setting up a new phone" and turns it into a tutorial. As you step through the different components to "set up your new phone" you learn how you can interact with the world. The metaphor was so clever it was hard to be impatient about wanting to get to the real game.

The concept of the game, a journey of personal discovery at the boundary of magic and technology works. It uses the smartphone concept so well to reveal what makes smartphones feel special. For all the addictive apps and deceptive business practices, the concept of a pocket device that connects you to thoughts, imagination, and inspiration is pure magic. Guildlings captures that feeling through its UX.

If you are an RPG fan, this game has a lot of heart and inventiveness to offer you. The story is well written, the art is fun, and the mechanics offer enough novelty that you'll enjoy exploring the nooks and crannies of the world. For a fan, Guildlings might justify the purchase of Apple Arcade for a month or two. For other people, Guildlings is a game that you will enjoy experimenting with if you already own Apple Arcade but probably not enough on its own to justify the purchase. For me, Guildlings feels like the type of game that justifies the existence of Apple Arcade. It's delightfully experimental and it can focus on the experience of the game rather than being distracted by monetization or player engagement.