5 Thoughts for 5 Years of Bohnanza Duel

I've wanted to talk about Bohnanza: The Duel for a little while. It's been one of my most played games on Steam (about 54 hours total). I want to take a quit moment to think about why that might be.

It's weird to think about software being nearly a decade old and being unchanged. Comparing that to other forms of architecture (straining at the word a bit) it's different. Houses that are hundreds of years old have things to teach us and ways to inspire us in ways that old software does not, aesthetically at least. I wonder if this has to do with the fact that old software runs on new machines and so our frame of reference changes. Old buildings live in the same world but old software lives on new hardware.

Bean farming is an out-left-field concept for a game. It's an economic game about beans. The ridiculousness compounds with the art to create an experience that's freeing. This doesn't need to become a rant about how new games are about epic, dark spectacles. But... I think there's something subversive about a game about beans. It takes the seriousness out of it, both in the experience of playing the game but also in the purpose of games altogether.

I think it was on an episode of The Three Donkeys, the short lived game design podcast that Richard Garfield was a host on. He talked about how one of the delights of games is the possibility for the rules to combine in ways that are completely absurd. He mentioned the idea of giving a mammoth wings in Magic: The Gathering. Bohnanza embodies this concept. It reminds me of something like Modern Art where the conspicuousness of the concept makes the experience more immersive.

3. It Feels a Lot Like Hearthstone or Legends of Runeterra

This might seem like an absurd comparison. Hearthstone and Legends of Runeterra have beautiful artwork (the correct resolution for the device), and beautiful animations For one thing, it's fast. You can play a game in 10-15 minutes. This makes starting an easy decision and idly playing while you watch TV or relax at the end of the day.

The game is generous. There are these goal cards that show up in the bottom right of the screen. They're sequences of cards that you have to match in order to score additional points. However, the game allows you to score if you or the opponent makes the connections themselves. It's the little type of thing that big games like Hearthstone or Runeterra get right. They find ways to make cards more permissive, so the game feels like it's got your back.

The UX is well thought out. It's easy to see the layout of the screen at a glance, which makes moments like the one depicted here (the trading phase) easy to make decisions without being blocked by the game. Bohnanza: The Duel also does a good job of using animations to communicate intent. You can pull the cards out of their slot and drag them around, giving them weight and life. The game can be understood at a glance while you play. Unlike other board games where you have to zoom in and out on the screen to figure out what's going on, The Duel makes itself apparent to you. Some of this is the benefit of the game. There aren't many moving pieces to think about. But that simplicity is what makes it so good for the digital space. 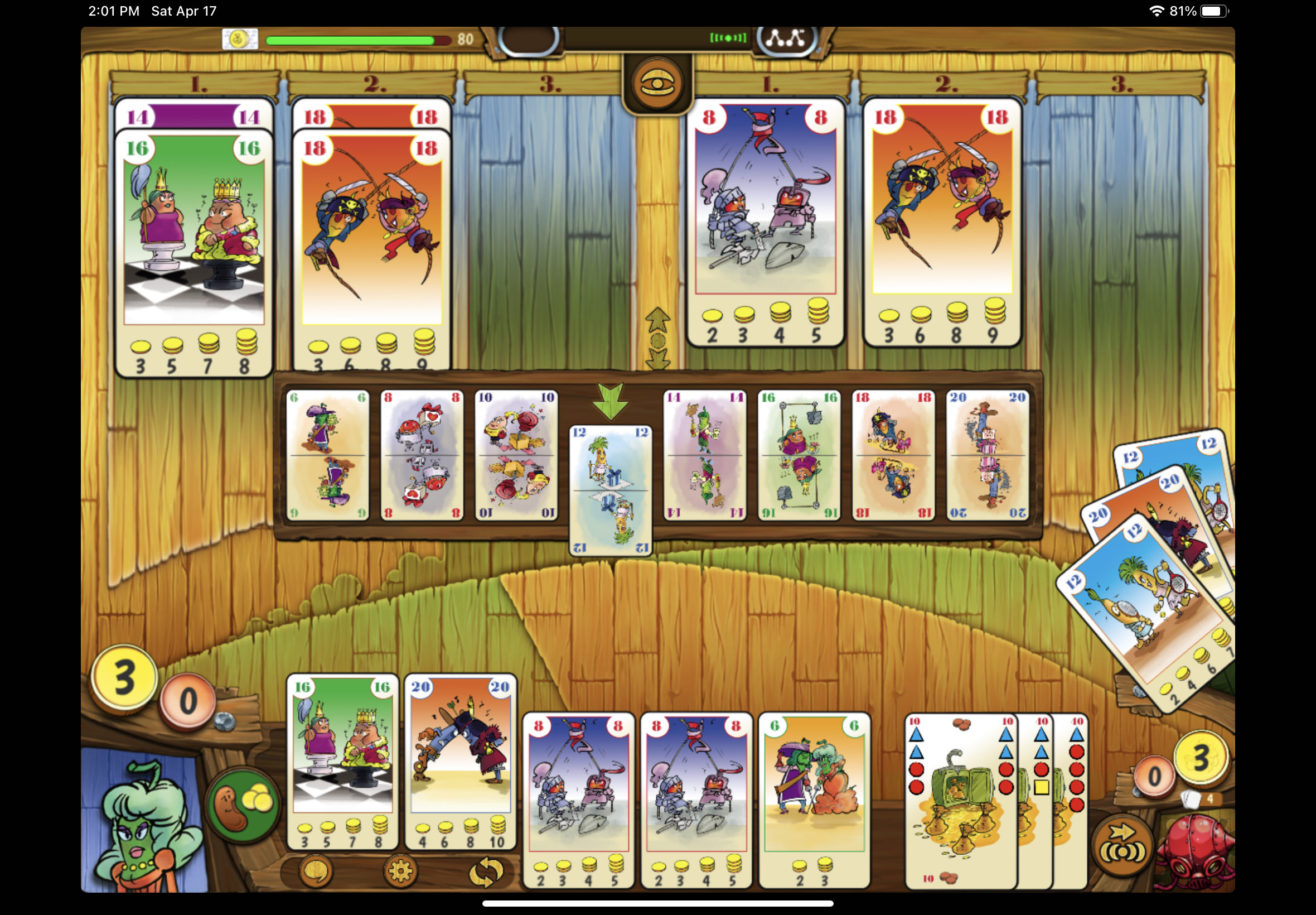 Since the start of the pandemic, playing games on computers has gotten me and my gaming group thinking about the types of games that fit well digitally. Games like Root and Scythe feel like perfect fits because the computer does so much of the math for you. And a game like Bunny Kingdom similarly feels like the perfect fit because the decisions are simple but there are so many places to do math. But I think it's worth considering about the opposite direction. Instead of trying to find games that will do the math for you, finding games that you want to play often (because they're so quick) are also a good fit for digital experiences. They make it possible to repeat experiences outside of game days, and fit more into your life.

2. It's a Two Player Game That Feels like the Original

There's a trend in board games where successful games (like Catan or Kingdomino) will see their names attached to new titles. Games like Kingdomino: The Duel or Troyes: The Dice Game are common. But often these games take the iconography of the original for new designs. From a business perspective, this makes perfect sense, but it's not solving the problem a player might want to be solved.

Bohnanza: The Duel, the digital version explicitly, solves a very clear problem for me. It packages the original game into an easy to play format and gave me digital opponents that I could access from my phone. Bohnanza felt like a great game because it was so quick and I found myself wanting to play it more often. The Duel takes the mechanics of the original and makes some tweaks so that it's possible to play with two people. It was nice to have my expectations met like that.

There are two main ways to play the game. There's the online version which can be played synchronously or asynchronously. Trying to find matches, as you would expect, was impossible. On top of that, the AI in the game is pretty flimsy and uninteresting to play against. Even though the game is good, the UX is well thought out, the game can't overcome the crashes or the lack of good online play.

With a couple of tweaks, it would be a game I'd recommend. But for now, it's a fun thought experience.