Why You Should Play The Solitaire Conspiracy

Solitaire has been a staple of most computer installations for the last 30 years, but it's only recently being explored as an area for new game design. Games like Card of Darkness, Shenzhen Solitaire, and *Solitairica* are all variations on the genre of stacking cards. We're living in a golden age of competent solitaire variants. The Solitaire Conspiracy by Bithell games is available on Steam for $11.99 and is a delightful entry in the growing genre of computer-based solitaire games.

Bithell games, the game studio famous for hits such as Thomas Was Alone and *Volume* started a new set of games in the last five years called "Shorts". Rather than building these up into huge titles, they add a lot of polish to games that are quick to play through and centered on a single idea. They started with Subsurface Circular, an erstwhile text adventure, and have expanded the concept here, to The Solitaire Conspiracy. 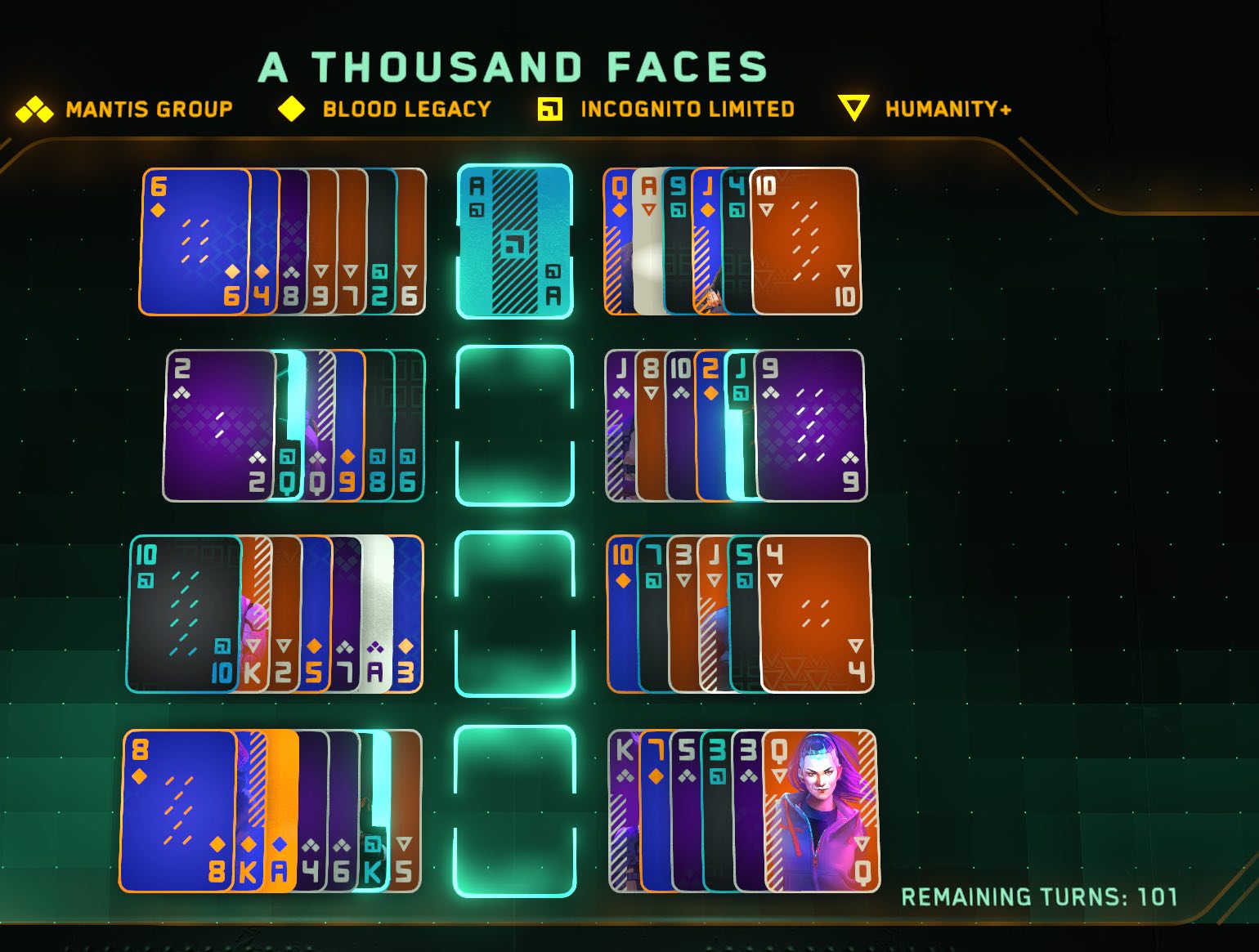 I'm predisposed to like these types of games. I love the "Shorts" concept that sets expectations for the type of experience players are going to get, and I appreciate that the game doesn't add a lot of content to juice the "value" I get from playing it. It's also a solitaire game, which I'm predisposed to like as is.

The Solitaire Conspiracy resembles FreeCell, a game I remember growing up watching my dad play, though it comes from the Streets and Alleys variant. Unlike FreeCell, the number of suits that make the deal change from round to round and there is fewer columns to play with. The tableau contains three columns with four rows each. The game reserves the middle column for the Ace Piles and deals the cards in the deck into the outer column. The Solitaire Conspiracy is less restrictive than FreeCell. Instead of requiring cards to be adjacent, i.e. a black 7 only goes on top of a red 8, you can play any suit card on top of any other suit card as long as that card is higher. I.e. a 2 of any suit goes on top of a 3, 4, 5, 6, 7, 8, 9, 10, Jack, Queen, or King of any other suit. 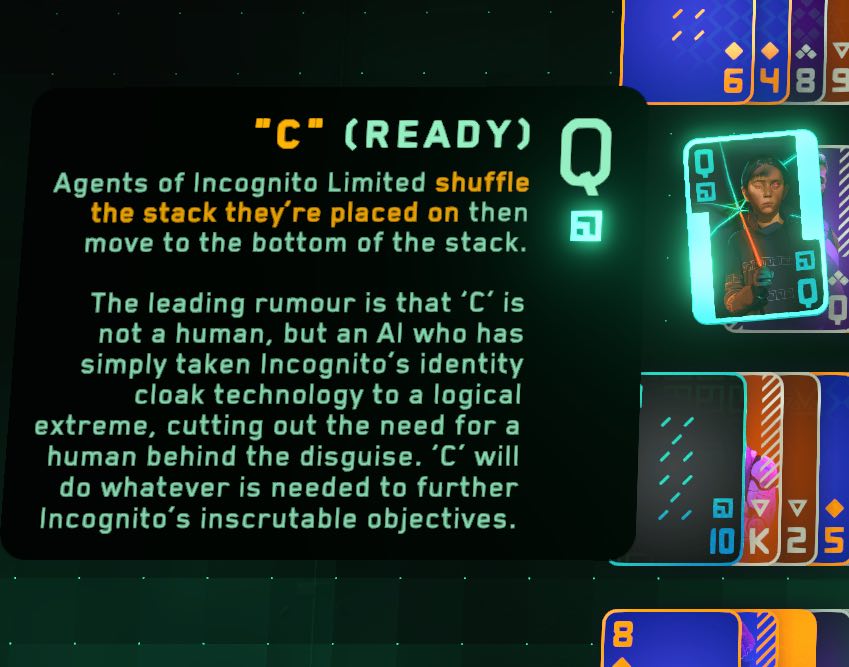 But the life of the game comes from the special powers the face cards contain. Each face card has a single use power. Some abilities are unambiguously good, like Drive Team Six's ability to send cards buried deep in a stack straight to the ace pile. Other abilities, like the "Blood Legacy" suit, reorders the stack you play the cards from smallest to biggest. It's not obvious because pulling the larger cards to the front of the stack is typically bad. However, it can help pull out the face cards to the top of the stack.

I don't want to lose site of the story either. The story revolves around a hacking conspiracy. You're a recruit to a spy agency, tasked with preventing a rogue agent from gaining access to the network. Performances by Greg Miller and Inel Tomlinson highlight the story, speaking to you directly as though you were on a futuristic

It took me about three and a half hours to make my way through the game the first time. That short amount of time makes it easy to recommend to just about anyone. While the game feels simple and easy to play, marrying story and game mechanics is challenging, Challenging gameplay can sideline even the best of stories, and an over the top story can make any gameplay feel onerous and boring. 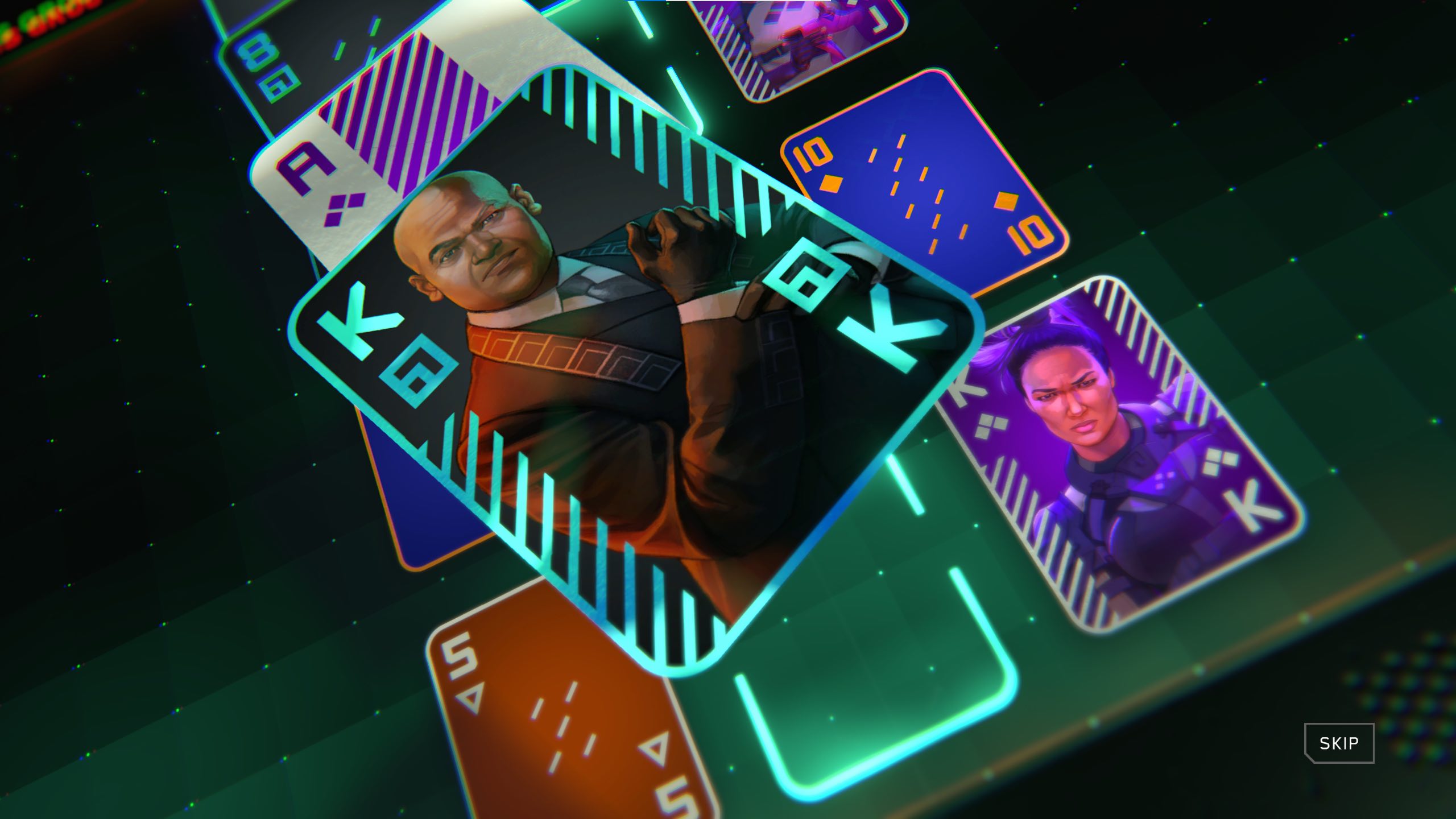 In The Solitaire Conspiracy the story segments are long enough to keep my attention, help me understand what's going on in the game's world without making me lose focus on the games. And playing on the default mode ensured that getting to the next story was a matter of when.

There's been a change recently, to how we talk about difficulty in games, highlighted by this Polygon article and this great, quick Tom Francis vlog. The relationship between difficulty and player experience for them comes down to a couple of different things: players and designers talk about challenge in different ways, and the word "difficulty" is squishy without a lot of analytical meaning behind it. I think there's also been a change (led by indie developers and what Anna Anthropy calls zinesters in Rise of the Video Game Zinesters) away from games as challenge machines and towards games as experience machines. Even on a structural level, The Solitaire Conspiracy recognizes that the fun of the game is getting to whisk the cards around and see the effects of the special abilities. And on my second play-through, when I felt more free to experiment, the restrictions made the game sing.

A lot of indie games ignore what sometimes gets called the game feel. Game Feel is a combination of UI, sound, and other effects that relate to the gameplay that make a game feel sharp and dynamic. The traditional solitaire example of this would be the end of a successful game when the cards come spilling out from the top, filling up the screen. Indie studios ignore these because of the budget. Finishing touches like these can be expensive, hard to pull off, and can end up looking worse if they're not executed perfectly. That's what makes them so spectacular here. 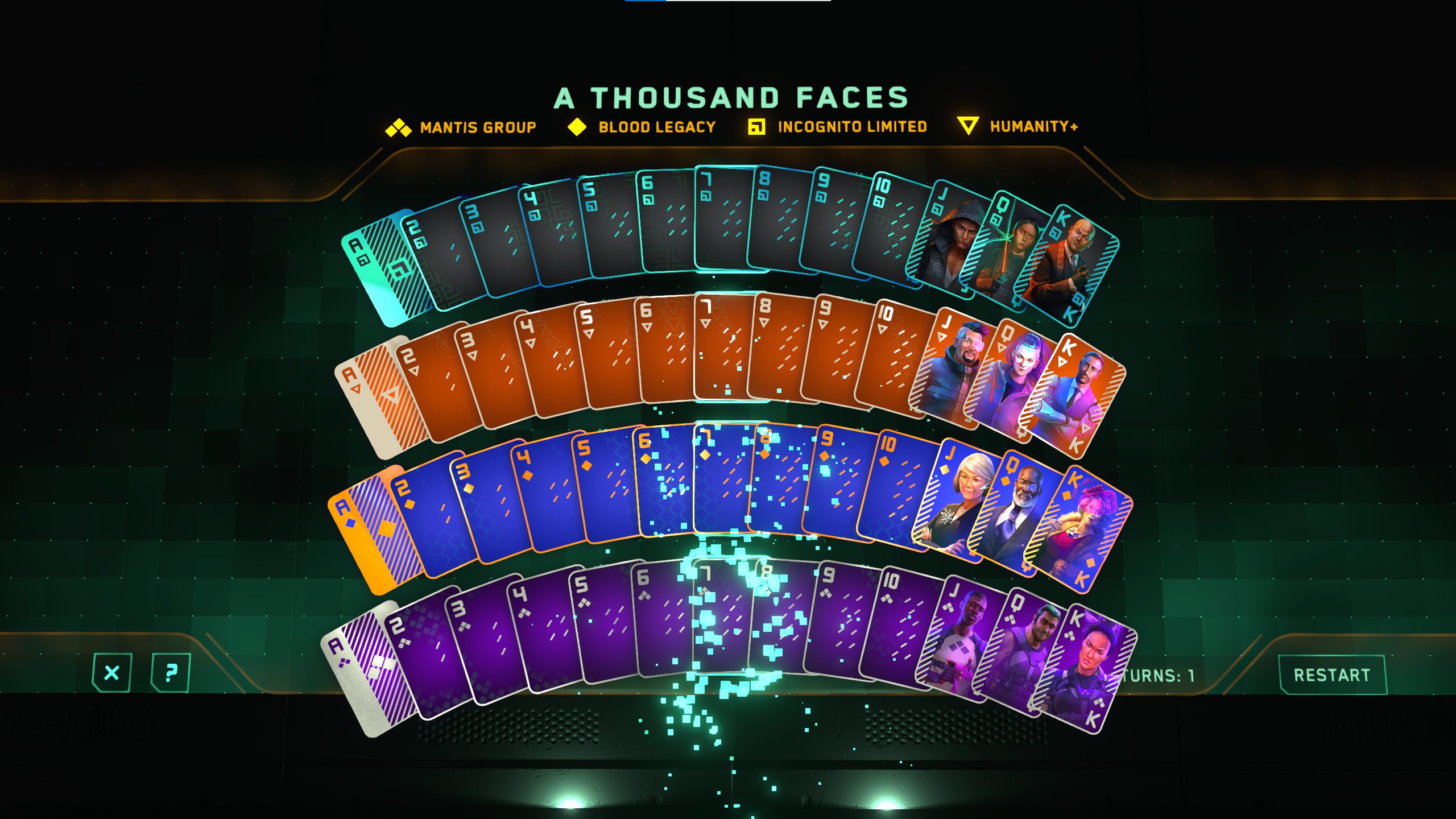 At the start of every round, the animation of the deck being dealt out plays as the camera zooms in and out of the table. When you pick up a card, it tilts slightly, and as you drag them around the screen, they lag slightly, as if they have weight and heft. When the face cards are active, they light up, and when they get played, a flash of light appears as the special ability takes effect. And when the game ends, the cards in each suit get spread across the table, like a nod to a dealer spreading the cards across a poker table. Games don't need to have these types of flourishes, but the focus of The Solitaire Conspiracy on the glamorous fictional world of international espionage fits with this treatment.

I would recommend playing The Solitaire Conspiracy to wind down or pass the time after a long day at work. It's like two of the best time wasters for a cross-country flight (a thriller and solitaire game) mashed together.

If you've finished The Solitaire Conspiracy and are on the lookout for games to play while you wait for the next daily to drop, I'd recommend something like Finished! which is a crunchier Solitaire type game with its own fun tweaks. If you loved the story of The Solitaire Conspiracy, I'd go for something like *Card of Darkness. If the story really got to you, I'd go for another Bithell classic like Subsurface Circular or Quarantine Circular *or another title like Wintermoor Tactics Club which also does an excellent job of marrying the narrative and the gameplay.

It was one of my favorite games of 2018 and the re-release on Nintendo Switch feels like a great opportunity to take another look.